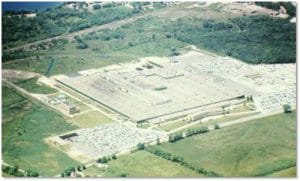 Following the success of the Navy work, Gilbane secured a national client in General Motors. In 1946, Gilbane built GM’s new assembly plant in Framingham, MA worth $12 million. It was the largest industrial plant in New England at the time. This was Gilbane’s first significant out-of-state project and marked a major milestone in the company’s development. The relationship with GM grew and in 1957 Gilbane was awarded the Fisher Body Plant project in Mansfield , OH.