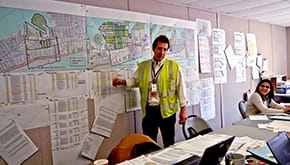 Building Hope by Restoring Your Homes

As a result of the devastation caused by Superstorm Sandy, New York City Mayor Bloomberg in partnership with FEMA, launched an unprecedented program to get as many New Yorkers as possible back in their homes as quickly as possible.

The Rapid Repairs Program (RRP) provided immediate and comprehensive assistance to thousands of New York City residents who were displaced and unable to return their homes due to the lack of basic services. The RRP is part of the Sheltering and Temporary Essential Power (STEP) Pilot Program through FEMA to provide essential power to affected communities.

Gilbane was chosen as one of six construction firms to manage the repairs and provide critical aid to displaced families and communities. Each of the contractors were responsible for a geographic area. Gilbane Building Company was assigned to the Borough of Queens which included the communities of Breezy Point, Rockaways, and Far Rockaways.

Approximately 60,000 residential buildings were located within the FEMA surge zone, many of which sustained flood-related damage and were without heat, power, hot water or necessary repairs required to make them safe for residents. Because the City was facing an unprecedented challenge given the scope and nature of this program, immediate management and oversight processes were essential in getting the project underway as quickly as possible. We were positioned to have a complete system in place to manage these critical processes in an organized and expeditious manner from day one.

In the United States, Hurricane Sandy affected 24 states, with particularly severe damage in New Jersey and New York. Its storm surge hit New York City on October 29, 2012 flooding streets, tunnels and subway lines and cutting power in and around the city. Rapid Repairs Program was unique in that no precedent had been set in the history of New York City in how to manage such an extreme situation.