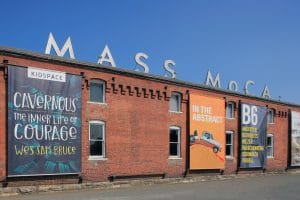 The 100 three-story post-and-beam structure features ample natural light from the hundreds of windows lining the perimeter of the building.   As part of the renovation, more than 350 tons of structural steel was incorporated into the 100 year old building.  Additionally, nearly 5,000 original bricks were removed, cleaned, and re-used, as was over 60,000 square feet of maple flooring. A new dramatic two-story mullioned window at the western prow of the building, facing west to the Berkshire and Taconic Mountains, showcases the dramatic confluence of the north and south branches of The Hoosic River.  An historic window well (that was in-filled by former tenants) was restored during this renovation, its roof replaced with a skylight measuring 20-feet wide by 140-feet long.

“The local knowledge of the Gilbane team, their in-depth museum experience, and excellent collaboration with Bruner/Cott Architects resulted in a beautiful revitalization of the building – they really brought our vision to life,” said Larry Smallwood, MASS MoCA Deputy Director and COO.

The expansion doubles the current gallery footprint and adding new art fabrication workshops, performing artists’ support facilities, and music festival amenities.  The centerpiece of the building is a series of changing exhibitions and long-term installations and collaborations with artists Laurie Anderson, Jenny Holzer, and James Turrell, the Louise Bourgeois Trust, the Robert Rauschenberg Foundation, and the estate of Gunnar Schonbeck.

Gilbane Building Company has a long history of building some of the Nation’s most prestigious cultural and public spaces including National Air and Space Museum, Vietnam World War II Memorial, and Corning Museum of Glass. In the last 10 years, Gilbane has completed nearly 30 museum projects totaling more than $1 billion and over 4 million square feet.  Learn more about the MASS MoCA project http://www.gilbaneco.com/project/massachusetts-museum-contemporary-art-mass-moca-building-6-robert-w-wilson-building/

MASS MoCA is one of the world’s liveliest (and largest) centers for making and enjoying today’s most important art, music, dance, theater, film, and video. Hundreds of works of visual and performing art have been created on its 19th-century factory campus during fabrication and rehearsal residencies, making MASS MoCA among the most productive sites in the country for the creation and presentation of new art. More platform than box, MASS MoCA strives to bring to its audiences art experiences that are fresh, engaging, and transformative.

Gilbane provides a full slate of construction and facilities-related services – from pre-construction planning and integrated consulting capabilities to comprehensive construction management, close-out and facility management services – for clients across various markets. Founded in 1873 and still a privately held, family-owned company, Gilbane has 48 office locations around the world.

Gilbane has been a leading Boston construction firm since 1946, serving commercial, institutional, and public clients in the Commonwealth including Wentworth Institute of Technology, Genzyme, Fidelity Investments, City of Boston-Boston Public Schools and Bank of America. For more information, visit www.gilbaneco.com/boston