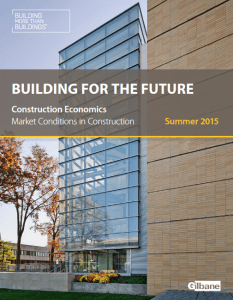 Providence, RI – September 18, 2015 – Leading global construction and facilities-related services firm Gilbane Building Company recently announced the findings from its in-house quarterly economics report: Building for the Future – Construction Economics: Market Conditions in Construction. Among its most notable findings, the report indicates spending on nonresidential buildings is on pace to grow by 20 percent-plus by end of 2015. Further, non-building infrastructure spending, after a brief gain, will go flat or decline until moderate growth resumes in the fourth quarter of 2015.

“The growth rate tends to get lost when watching only the month to month changes in spending,” said the report’s author Ed Zarenski, a construction economics analyst with more than 40 years of expertise in the construction industry. He added, “Five times in the last year the month to month rate of growth has been less than half of one-percent, and yet through July year-over-year spending is up more than 13 percent. In the last three quarters spending registered the fastest rate of growth in over nine years.”

According to the report, total spending for all types of construction will grow 11 percent year- over-year from 2014 to 2015. The year started at an annual rate of spending near $995 billion and is expected to finish at a rate of $1.100 trillion. The total construction workforce hit a 15-year low in 2013 at about 6.4 million. Currently the workforce is growing and is 7.0 million, still at a 15-year low, about 1.4 million lower than the 2006-2007 peak.

Spending in 2015 is increasing at a much faster rate than hiring.  That is contrary to what is expected in a typical growth period, during which it would be normal for labor to grow faster than spending.  Although there is widespread discussion of labor shortages, the difference in new construction volume versus labor growth may be due to hiring and hours worked growth exceeding new construction volume in four of the last five years.  Even with volume growing faster than labor this year, which means improved productivity this year, we still see a net productivity loss during the last 6 years of new construction growth. This is typical of expansion periods.

Other report highlights include:

The complete report, Building for the Future – Construction Economics: Market Conditions in Construction, and its executive summary are available free for download here at https://www.gilbaneco.com/economic-report.

Gilbane provides a full slate of construction and facilities-related services – from pre-construction planning and integrated consulting capabilities to comprehensive construction management, close-out and facility management services – for clients across various markets. Founded in 1873 in Rhode Island and still a privately held, family-owned company, Gilbane has more than 50 office locations around the world. Gilbane was named to Providence Business News’ Best Places to Work list in 2015 and is an eleven time member of Training Magazine’s Top 125 companies.