Gardnerville, NV – March 16, 2016 – Gilbane Building Company, a global leader in construction services, is happy to announce the opening of the Washoe Travel Plaza in February of 2016.  The project is the first component of the Commercial Development for the Washoe Tribe of Nevada and California which will also contain a new 15,000SF casino which is scheduled to open in July, 2016. 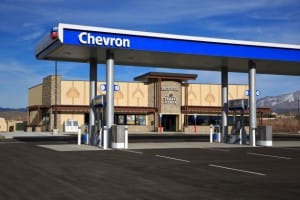 This project consisted of a 6,000 square foot, single story convenience store and is part of a gas/petrol station which includes auto and diesel fueling stations and associated canopy structures.  A Small Kitchen space is also incorporated into the store for food preparation, storage and sales as well as walk-in coolers, freezers and a beer cave.  The overall site improvements and size of the development is no small feat, in comparison to the square footage of the convenience store the site included over 7 acres of paved parking, concrete sidewalk, drives, landscaping areas and more.  The site improvements also included a half mile of Highway expansion and repaving, as well as over a half mile of new water line and new sewer line infrastructure to the site.

“Coordinating the work with over 10 different entities including various Public Utilities and other authorities having jurisdiction on a county, state, and federal level, while performing the work on a Tribal-BIA Indian Reservation presented logistical challenges to the Project Team, but nothing we couldn’t handle”, says Kurt Parriott, Project Manager, Gilbane Building Company, “We are happy to complete this work for the Washoe Tribe of Nevada and California and allow them to thrive in their new business and operation endeavors.”

Gilbane provides a full slate of construction and facilities-related services – from pre-construction planning and integrated consulting capabilities to comprehensive construction management, close-out and facility management services – for clients across various markets. Founded in 1873 and still a privately held, family-owned company, Gilbane has more than 50 office locations around the world. For more information, visit www.gilbaneco.com.