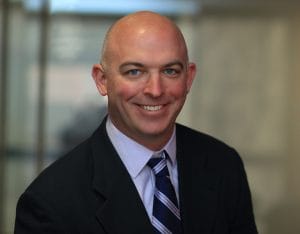 BOSTON, MA – June 27, 2019 – As part of Gilbane Building Company’s plans for succession and expansion, the company announced the promotion of Steve Duvel to senior vice president and division leader of New England, succeeding Ryan Hutchins, who will lead global sales and marketing as an executive vice president.

Duvel, a 26-year industry veteran, will be responsible for operational, sales and administrative functions for Gilbane’s New England division, which encompasses 365 staff in offices located in Boston, MA; Providence, RI; Glastonbury, CT; Stamford, CT; and Merrimack, NH. Duvel will lead the continued development of the division, which has experienced tremendous growth, resulting in multiple years of record results. The division has delivered such diverse projects as PTC’s landmark headquarters in the Seaport District of Boston, the expansion of the Hartford Hospital’s Bone & Joint Institute in Connecticut, as well as the award winning, South Street Landing project in Providence, RI.

“The New England market represents exceptional growth opportunities for Gilbane and our technology-driven, Lean approach to construction management,” said Ryan Hutchins, executive vice president of Gilbane. “Under Steve’s proven leadership, we look forward to accelerating our growth trajectory and continuing our work on prominent projects that are changing the face of New England and beyond.”

Duvel began his career with Gilbane in Houston, Texas in 1997. After relocating to Rhode Island in 2000, he successfully delivered such landmark projects as the Connecticut Convention Center, Dunkin Donuts Center Renovation and the University of Rhode Island’s Ryan Center. Duvel most recently served as the company’s Rhode Island District operations manager where he demonstrated a major focus in cultivating successful teams through workforce development, inclusion and diversity, and a tremendous focus on safety and client satisfaction. As a member of Roger Williams University’s Construction Management Professional Advisory Board, Duvel remains committed to the education and preparedness of the next generation of industry professionals.

Duvel is an alumnus of the University of Massachusetts Amherst where he earned a degree in Civil Engineering. He currently serves on the board of Leadership Rhode Island. A native to New England, Duvel resides in Barrington, Rhode Island with his wife and children.

Gilbane provides a full slate of construction and facilities-related services – from pre-construction planning and integrated consulting capabilities to comprehensive construction management, close-out and facility management services – for clients across various markets. Founded in 1873 and still a privately held, family-owned company, Gilbane has more than 45 office locations around the world. For more information, visit www.gilbaneco.com