The school celebrated 80th anniversary at the groundbreaking ceremony 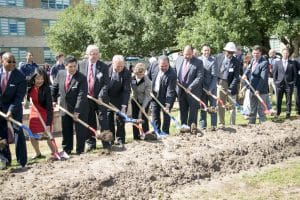 Eighty Lamar High School graduates armed with shovels lined the school’s front lawn on Thursday, March 30 eager to break ground on a new campus as they celebrated the 80th anniversary of their beloved alma mater.  Former Texas governor Mark White, Jr. was on hand to give the keynote speech at the ceremony.

Lamar is being rebuilt as part of the Houston Independent School District’s 2012 Bond Program. The new campus will support the school’s International Baccalaureate and Business Administration programs and accommodate 2,800 students.

“This was truly a remarkable event.  To have the distinguished representatives from each of the 80 Lamar graduating classes was a special touch and made for the largest groundbreaking event that I have personally ever participated in.” says Dan Gilbane, Southwest Business Unit Leader. “Gilbane is proud of our history of partnership with the Houston Independent School District and we look forward to continued success on this project with the HISD team, their consultants, Dr. McSwain and the entire Lamar community.”

The project will include a new four-story academic wing with four flexible academic areas, a large covered transit center for bus and parent drop-off, a black box theater and band instruction area, a large banquet and food preparation space for the school’s culinary program, and other career and technical education spaces.  The scope also includes a multi-level parking garage, competition gymnasium and natatorium, and additional athletic fields.  The existing main building, built in 1937, with its well-known art deco façade, will continue to serve as the main entrance to the school.  It will house the existing auditorium, an alumni center, an employee child care facility, and a performing arts area.

“This is an exciting day for us”, said Lamar Principal, James McSwain, “it’s a day that the school community has been looking forward to for many years.”

Gilbane provides a full slate of construction and facilities-related services – from pre-construction planning and integrated consulting capabilities to comprehensive construction management, close-out and facility management services – for clients across various markets. Founded in 1873 and still a privately held, family-owned company, Gilbane has more than 50 office locations around the world. For more information, visit www.gilbaneco.com.