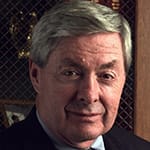 A trustee emeritus of Brown University serving on numerous Brown committees, he is a former president, director and board member for the Greater Providence Chamber of Commerce and a past chairman for the New England Council. Mr. Choquette was recently named to the advisory board for Teach for America – Rhode Island. He is a Distinguished Eagle Scout and past president of the Boys Scouts of America’s Northeast Region and continues to serve on the Narragansett Council’s board. He also is a trustee for the Trinity Repertory Company.

A graduate of Brown University with a bachelor’s degree in English, Mr. Choquette holds a Bachelor of Laws degree from Harvard Law School. He has received honorary degrees from Bryant University, Roger Williams University and New England Institute of Technology. An honored member of the Brown University Hall of Fame and the Providence Gridiron Club Hall of Fame, Paul received the NCAA Silver Anniversary Award in 1985 and the Distinguished American Award from the Rhode Island Chapter of the National Football Foundation in 1991.