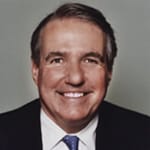 John P. Fowler was a co-founder and executive managing director at Holliday Fenoglio Fowler LP and HFF Inc. overseeing major commercial financing, equity and sales transactions prior to HFF Inc.’s sale to JLL in July 2019. In his current role, he will continue to serve on JLL’s Capital Markets Executive Committee and will oversee the Boston office activities. During the past 40 years, he has successfully completed close to 900 real estate transactions valued at more than $88 billion.

Mr. Fowler’s career began in 1968 at John Hancock Mutual Life Insurance Company’s real estate department. He then joined a New England-based mortgage banking and development company. In 1974, he formed Fowler, Goedecke & Co., a predecessor to Fowler Goedecke Ellis & O’Connor, Inc., which merged into HFF in 1998. Mr. Fowler currently serves as vice chairman emeritus of HFF Inc. and has been its director emeritus since 2012.

He is a current and active member of Urban Land Institute, Real Estate Finance Association, Mortgage Bankers Association, International Council of Shopping Centers, and the National Association of Industrial and Office Properties. Previously and for the past ten years, Mr. Fowler was a member of the board of trustees at the Roxbury Latin School.