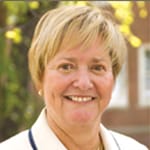 J. Bonnie Newman is chancellor emeritus of the Community College System of New Hampshire. Previously, she served as the interim president of the University of New Hampshire, executive dean at Harvard University’s John F. Kennedy School of Government and as assistant to the President of the United States for management and administration for President George H.W. Bush. During the administration of President Ronald Reagan, Ms. Newman served as the assistant secretary of commerce for economic development and as associate director of the office of presidential personnel at the White House.

Currently a director of Exeter Trust Company, she is a former trustee at Exeter Hospital and was a founding director at the Lumina Foundation for Education. She served as chairman of the U.S. Naval Academy Board of Visitors and as vice chair of the New Hampshire Charitable Foundation.

Ms. Newman holds a Bachelor of Arts degree from St. Joseph’s College of Maine and a Masters of Education degree from The Pennsylvania State University.