Get Inked! Sign up to get new posts sent to your email.

Special Edition: How are Crossfit and Corporate Interiors related?

As a collegiate athlete and overall sports fanatic, I largely attribute any career success, overall health metrics and most of what I have enjoyed over the years to athletics.  When I stepped away from collegiate athletics, I struggled to find that competitive outlet.  While work provided the rigor, ability to showcase a work ethic and goals to obtain, the competitive physicality was missing.  It took several years, and a cross country move, to find what I sought in Crossfit.  Oddly enough, as I began to develop an unhealthy obsession with my physical fitness, I was simultaneously helping Gilbane dive head first into Corporate Interiors on the West Coast for the first time.  A vertical market space that the business unit had only previously dabbled in.  Over the last four years I have found incredible synergy between Crossfit training, which typically includes High Intensity Interval Training (HIIT), constant variation and high skill movements, and the demands on a construction company to deliver tenant spaces of the highest quality.

I attribute some of this connection to the changes we are seeing in workplace design.  Whether it’s the open office, full service café’s, break-out areas, micro kitchens, or unique collaboration areas, the “traditional” office has become much more than that; a trend that’s showing no sign of slowing down.

So how can Crossfit and Corporate Interiors be related? The easy answer, both are a sprint to the finished that typically leave you (or the team) in a daze, but let’s talk specifics.

Whether a sand bag, stone, sled, sledge hammer or other seemingly normal object, Crossfit is full of new challenges deadest on turning the simple into the epidemy of miserable.  If you don’t believe me, go pick up a 150lb sandbag and throw it over your shoulder as many times as you can in 16 minutes with a 50 meter carry every two minutes.  You probably won’t look at sand the same again.

Today’s architecture and workplace have found ways to include new materials and push the limits of how we use old ones.  For instance, turning cold formed steel into a decorative finish.  The challenge construction professionals face is how to take what is typically a structural component with large tolerances and turn it into a finished product that demands precision.  The idea is simple: use z-clips, fasteners and some variation of sheet metal to create a panel and mount it to backing in the wall. In many ways, it is that simple, but remember, there is always a time component working against you.  The construction team only has months or weeks to figure this out, which includes working through the details with the design team to ensure a constructible design, procurement, design drawings, coordination with surrounding trades, fabrication and installation.  All with a material that is being used differently than it has ever been used before. 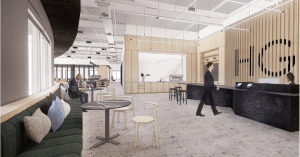 Be creative.  Find a different way to procure, perhaps a design-build alternate with a Trade Contractor that can drive the detail coordination, while doing their shop drawings to move straight into fabrication.  Maybe even look at a millwork solution.  After all, millworkers are used to working with small tolerances, panels and veneers.

Bottom line: we owe it to our clients and design partners to find solutions to their unique spaces.

Within the corporate interiors world, a team’s success is largely dependent on its ability to adapt to change.  On a recent interiors project, Gilbane’s San Jose team was faced with a First Day of Business (FDOB) that couldn’t change (a typical requirement) and a design phase that was clearly going to run long due to the creativity required for the new space.  When the team analyzed the schedule, it quickly became clear that the normal process just wouldn’t work.  We were nimble and we adapted.

You are staring at a barbell, loaded with 105lbs, but it’s not the weight that is causing your hesitation in slinging it overhead.  Instead, it’s your spiked heart rate from the 16 box jump-overs you just completed.  You look up and see 16 minutes of the original 24 left and, at this point, your mind is telling you one thing – the plan isn’t going to work.  Just eight minutes ago your spirits were much better, but so were the circumstances.  The 105lbs felt like a feather through the 12 deadlifts and the 24” box might as well have been one of your steps up to the second floor of your house.  The plan of unbroken deadlifts, fast yet controllable box jumps and sets of 9,8,7 in the push press was a slam dunk.  Yet here you are, realizing the plan must change or those 6+ rounds just aren’t going to happen. 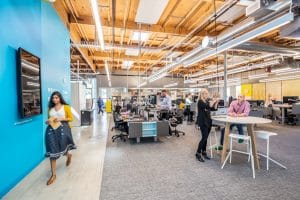 creativity by allowing them the most time to complete the design, with the time our team needed to build. The solution resulted in a phased design process with 18 different permits, allowing our team to start demolition and structural repairs while the client continued programming.  As we started to build out the core, the space plan for the open office and creative spaces were still evolving so the team created an environment in which design and permitting became Just In Time deliverables.  The result was a First Day of Business as planned and a highly innovative space. Check it out for yourself here.

High Intensity Workouts typically rely on moving weight or performing body weight exercises within a set time frame thereby significantly increasing the difficulty of an otherwise normal movement or exercise.  Getting used to constant muscle fatigue, spiking heart rates and quick transitions can be difficult, yet fun and exhilarating.  The thrill of accomplishment after an exhausting workout is what keeps me going back for more.

In recent years, the pace of corporate interiors has only quickened.  While workplace design continues to evolve and is becoming increasingly more complex to build, the speed of delivery isn’t changing proportionally to accommodate the added complexities.  Instead, companies’ overwhelming demand for more space to both meet and attract an influx of workers continues to drive the need for faster construction schedules.  To compound this issue, in most areas of the country, skilled construction workers are struggling to meet the demands placed on the industry leading to significant increases in construction costs.

Developing lean teams that are capable of meeting these ambitious schedules is challenging.  Each member needs the competitive edge that drives them to take on project challenges, despite all odds.  Such as completing a 40,000 sqft flip of a workplace in Palo Alto in six weeks.  This type of effort does not allow for pacing, but instead requires a team that can bust out of the gates and into an all-out sprint.  Quickly transitioning from demolition, to architectural finishes, in this type of schedule offers no time for rest and requires constant re-evaluation and altering of your approach.  Doing this takes drive, but also expertise. 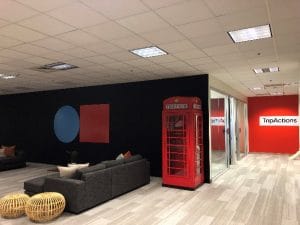 In 2016, the annual Crossfit Open called for As Many Rounds As Possible (AMRAP) of 10 power snatches and 3 bar muscle ups in 7 minutes.  High skill movements, in a very short window of time and leaving athletes with only one option.  Just go for it.  However, as most can imagine or have experienced, the muscle fatigue sets in as the athlete quickly transitions between movements and the complexity of each starts to cause technique failure.  The simple coaching cues during training often fades and the athlete is in survival mode.  Those who do the best in these cases can maintain composure, embrace chaos, and hold on to the positioning throughout the skill movements.  These athletes are able to perform because they have been in this situation before; it isn’t the first time.

Our team members are no different.  They thrive because they embrace the speed demanded by the client and often challenge themselves to best what is being required.  After all, in this world, that will only make them better.  As a company, it is our responsibility to arm them with the tools to succeed.  To build Lean processes that help manage our risk while enable our teams to deliver for our clients. 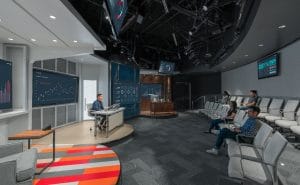 When first entering a sport of any kind an athlete quickly experiences tremendous gains, but often plateaus at some point.  HIIT, Crossfit and other Cross Training methodologies have attempted to constantly vary training to decrease these plateaus and create a better, fitter athlete.

As workplace continues to change, Gilbane is challenging how we deliver for our clients.  By mixing delivery methods, skillsets, systems and personalities we are creating teams that are better suited to deliver innovative workplaces.

Having grown up around construction, Evan Synstad’s father still owns and operates the family’s residential firm. Evan chose to attend Virginia Tech, where he earned a degree in Structural Engineering before started his career within Gilbane’s Richmond, VA office. There he helped lead a few notable projects including a large headquarters relocation and expansion before transferring to San Jose, CA. In the Bay Area he started and built an Interiors business while helping to grow Gilbane’s overall market share within a highly competitive market. He recently relocated to Charlotte to expand Gilbane Building Company’s Portfolio in North Carolina. Evan’s diverse background within Gilbane and across multiple market sectors provide a unique insight to project delivery and client satisfaction. Outside of work, Evan spends almost all of his free time with his young daughter and wife, who is expecting a baby boy in May. View LinkedIn Profile

Get new posts sent to your email